Medicine news
OpenMeal: Need Some Free Food? We’re Expanding to...
Anti-Lockdown Protests: a Display of New Blends of...
OpenMeal: Backing Local Businesses and Individuals Affected by...
May Day During Coronavirus: Politicians and Police Attempt...
Billionaire Dissident Detained in China, the NY Times...
The Disproportionate Impact of COVID-19 on Black Communities
National Conference Call On the Need for Radical...
Do I Need a Multivitamin?
As Virus Spreads, Colleges Punt Students and Keep...
10 Simple and Healthy Ways To End Your...
Home HealthCoronavirus News Anti-Lockdown Protests: a Display of New Blends of Right Wing Unity
Coronavirus News 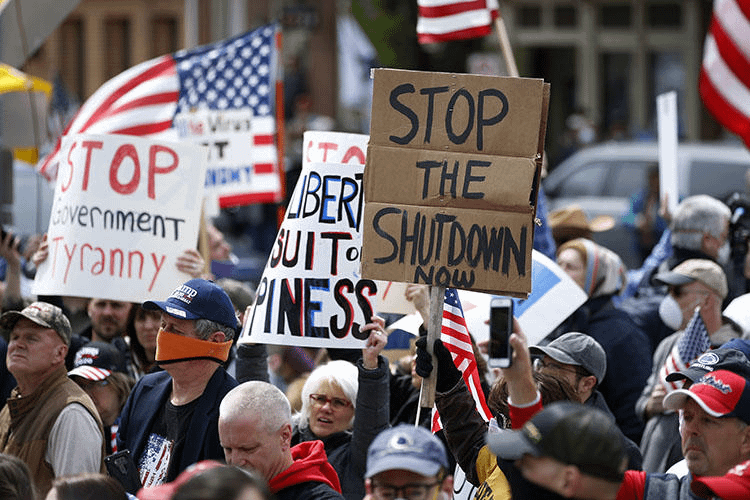 Over the last couple of weeks right-wing anti-lockdown protests have occurred throughout the country. The protesters’ basic demand is the lifting of shelter-in-place orders against the recommendations of public health officials. In order to understand the nature of these protests, it is essential to analyze a few somewhat contradictory aspects of these demonstrations not typically covered in mass media and social media. It is important to grasp the composition of these protests and the differing and conflicting ideas espoused at these assemblies. Protest attendees are frequently depicted as a homogeneous group of right-wing conspiracy theorists, but this is an oversimplification. In addition, major conservative interest groups and politicians have organized and supported the protests. Their motives for doing so must be explained as well, but the protests themselves aren’t reducible to the actions of Betsy DeVos and Charles Koch.

While powerful conservative groups and Republican party members have played a notable role in advancing these events, it would be incorrect to reduce this mobilization to the act of a powerful puppet master pulling all the strings. There are political differences between the organizations spurring these events. In addition, in the present crisis, there is a significant number of people who do not require too much prodding to organize along the rightist lines promoted at these events. But it would be incorrect to claim that the protestors are all *entirely *unified around a single set of racist or fascist ideas, or around coronavirus conspiracy theories. But these trends have been channeled, often by powerful interests, to support overall participation in these protests despite differences between them.

Trump tweeted multiple calls on his twitter to “liberate” states from lockdown.

In the arena of electoral politics, the protests have served to mobilize support for Trump and the Republican Party. With the 2020 presidential primaries on the horizon, the protests provide a golden opportunity to rally Trump’s base. In swing states like Pennsylvania, Wisconsin, and North Carolina, Republican lawmakers, politicians, and Trump allies have encouraged their social media followers to attend anti-lockdown protests. Trump has also openly supported anti-lockdown protests aimed at Democratic governors. Those in Trump’s circle are quicker to promote conspiracy theories. Eric Trump, Donald Trump’s son, has gone so far as to say that coronavirus is a ploy to stop his father’s campaign rallies and that it will magically disappear after election day.

At the same time, Trump has supported measures intended to slow the spread of the virus at the expense of normal functioning of the economy. In March, Trump supported the closure of schools and businesses. Also in March, Trump announced a partial closure of the U.S. southern and northern borders in response to the threat of the spread of the virus. Trump’s response has catered to both conspiracy theories and to an agenda that seeks to portray his response as “fair and balanced,” threading the needle between safety and economic collapse. This objective was echoed to a degree by organizers of “MAGA May Day” anti-lockdown protests on May 1st that occurred in several U.S. cities. The description of the event read: “Important: We are NOT anti-quarantine. The virus is not a hoax. It is very real, and we must protect the most vulnerable… health care workers, the elderly, those who are immune-compromised, and others." At many other anti-lockdown protests across the country such as “Operation Gridlock” in Michigan, people remained in their vehicles and wore masks.

Libertarian leaning conservative organizations have also been involved in these mobilizations. Some of these groups claim to be opposed to any economic shutdown at all. Libertarians promote a conspiracy-theory view that the problems in society are not a result of capitalism’s normal operation, but are instead a result of corruption which has “polluted” what would otherwise be a perfect social system. Rather than talking about the inherent tendencies under capitalism for wealth to concentrate in the hands of a few, for greater and greater inequality to develop, and for huge monopolies to emerge, libertarians claim that these ills are solely the result of a deviation away from a good form of capitalism. This quickly leads them to accept and promote conspiracy theories. However, groups pushing their politics under a libertarian label are often more adept at drawing people in by claiming ownership of “traditional” American values of individualism and “entrepreneurship” than those who start their pitches with warnings about reptile overlords.

These groups are often closely connected to powerful corporate interests. One such group that has organized and supported anti-lockdown protests is FreedomWorks, a Charles Koch affiliated organization that helped launch the Tea Party back in 2009. Before the Wisconsin protests on April 18th, a major financial contributor to FreedomWorks named Stephen Moore, who is also a Trump ally, posted a video on YouTube explaining how he was working with groups in Wisconsin to do a drive-in protest and that any bail or legal fees would be covered if someone got arrested. Convention of States Action (COSA) is another group that is connected with Koch’s funding network. It has mobilized anti-lockdown protests in Michigan, North Carolina, Ohio, and Wisconsin.

Different conspiracy-inclined trends, including
anti-vaxxer groups, have also attended anti-lockdown protests. Anti-vaxxers claim that the coronavirus pandemic provides pharmaceutical companies with an opportunity to push harmful vaccines on people while maintaining zero liability for harm inflicted in the process. Certain anti-vaxxers claim that the COVID-19 pandemic is part of a scheme to launch an insidious mass vaccination campaign. At an anti-lockdown rally in Texas, Alex Jones), the host of the conspiracy website InfoWars, was greeted with great acclaim and blessings of God when he showed up to speak about how the seriousness of the virus is being overestimated. This was ironic considering that Jones was recently officially warned by the FDA to not advertise and sell toothpaste that Jones claims can prevent infection by COVID-19 and even cure the infected.

There also have been more “far-right” groups and individuals in attendance. Groups like the Proud Boys attended anti-lockdown protests in Colorado, Nevada, Ohio, and Michigan. The Proud Boys are well known for their white supremacist ideology and their participation in far-right protests like the notorious “Unite the Right” rally that took place in August, 2017 in Charlottesville, VA, where the activist Heather Heyer was killed. At a protest in Columbus, Ohio one individual held up a sign with an illustration of a rodent wearing a yarmulke and the Star of David on its side next to the words “The Real Plague,” insinuating that “Jews are the real virus.” Racism and xenophobia certainly have permeated the anti-lockdown protests, and these groups are promoting this development. Overall, it seems like powerful entities supported by the likes of DeVos and Charles Koch have been able to channel a mix of xenophobic, conspiratorial, racist, and anti-Semitic individuals and organizations to support corporate agenda.

Many who are coming to such protests do so at least in part because they are concerned about the government’s response to COVID-19 and about the future of the economy. One protestor at “Operation Gridlock”, who identified herself as a small business owner,

“Our community is struggling. My husband is on unemployment for the first time in our life… we have bills to pay. The only stores open are Wal-Mart, that’s ridiculous! That’s why we’re here." Even though small business owners still live off the exploitation of their workers, this protestor was correct to point out some of the hardships faced by working-class people while massive corporations that are “too big to fail” like Wal-Mart still pull in huge profits. In fact, while 31% of small businesses have closed down after being deemed non-essential during lockdown orders, Wal-Mart is predicted to emerge from the pandemic stronger than ever.

There are other anti-lockdown protestors who justifiably recognize that the lockdown measures have had an uneven impact on people. At an

, one person in attendance stated, “I think better bounds could have been struck between keeping able bodied people at work and protecting vulnerable communities and I think that this one size fits all approach that they’ve come up with has been bad for most people." This makes the basic point that not everyone can afford to lose work and stay at home. There are millions of poor and homeless people who cannot do this. These examples indicate that not all people who show up to these protests simply regurgitate conspiracy theories or ultra-conservative ideals. Many show up because they are concerned or angry about the government’s response to COVID-19.

Those who are angry about the situation are responding to real problems. The U.S. government and its medical and economic system have failed working people by botching the response to the pandemic. The limitations of the U.S. medical system were exposed as hospitals were quickly overcrowded and lacked the necessary resources like respirators and tests to effectively identify and treat patients infected with COVID-19. These right-wing mobilizations show there is a strong basis to channel some of the anger over this outrage into support for Trump or other right-wing causes. However, this doesn’t mean that such anger cannot instead be directed to support causes radically opposed to such rotten ends.

About us: We're the Revolutionary United Front, a revolutionary organization in the U.S. organizing in the Greater Boston, New York, and San Francisco areas. We're working to support and advance various people’s struggles ranging from anti-war, immigrant, and international solidarity.

A Contagion Is Spreading Through the Economy Too

May Day During Coronavirus: Politicians and Police Attempt...

The Disproportionate Impact of COVID-19 on Black Communities

National Conference Call On the Need for Radical...